Telling your story matters; your own story which is otherwise not being told. Because, you see, stories not told are left in the shadows, creating sorrow and pain; they leave stories told, uncontested. The more stories told, the more complex reality becomes and the clearer it will be that every truth is a contested one. A contested truth that does matter. That is why I am sharing one of my stories with you.

I had felt it but could not see nor describe it. Then – during a course on race and racialization – Amade M’Charek (Professor of Anthropology of Science at the department of Anthropology of the University of Amsterdam) showed me how realities are constructed through imagined truths.

During a course on decoloniality at the University College Roosevelt in Middelburg, Alanna Lockward and Patricia Kaersenhout made me feel the pain created when constructed realities become uncontested through the veiling of other truths. They did so in the following ways.

‘You are a Black woman’, Alanna said during a class, ‘take the stage for your voice to be heard’. She had divided the class in smaller groups and had assigned us different questions to answer. It was now time to share our group answers with the entire class. She looked at our group and asked for our results. None of us took the lead in answering. That is when she encouraged me to speak up as a Black woman.

And there it was; I know I’m not a Black woman – by seeing me as Black woman I deny everything that I am. Still, in this world today I am. I spoke up and, there and then, during that class, I felt liberated by her and by myself. And then there was this performance by Patricia Kaersenhout. She had placed a number of tables in a circle and invited a couple of students to take a seat. I decided to participate in the performance and took a seat at one of the tables. Patricia had placed old history and science books on the tables.

She had also placed thick markers, craft knives, and pens on the tables and told us that we could use those tools to do whatever we wanted with the books. While we worked with the books, she walked circles around us, reading a text out loud.

Unfortunately I forgot what texts it was that Patricia read during the performance. I do remember what happened to me, while sitting at the table. I grabbed one of the books. It was a German scientific book. In it I saw descriptions of nature, music, and: I saw pictures of white, elite, men. A lot of white, elite man from – guessing from their attire – probably around the 19th century. Suddenly something came over me and I felt anger. Anger and pain coming to the surface. 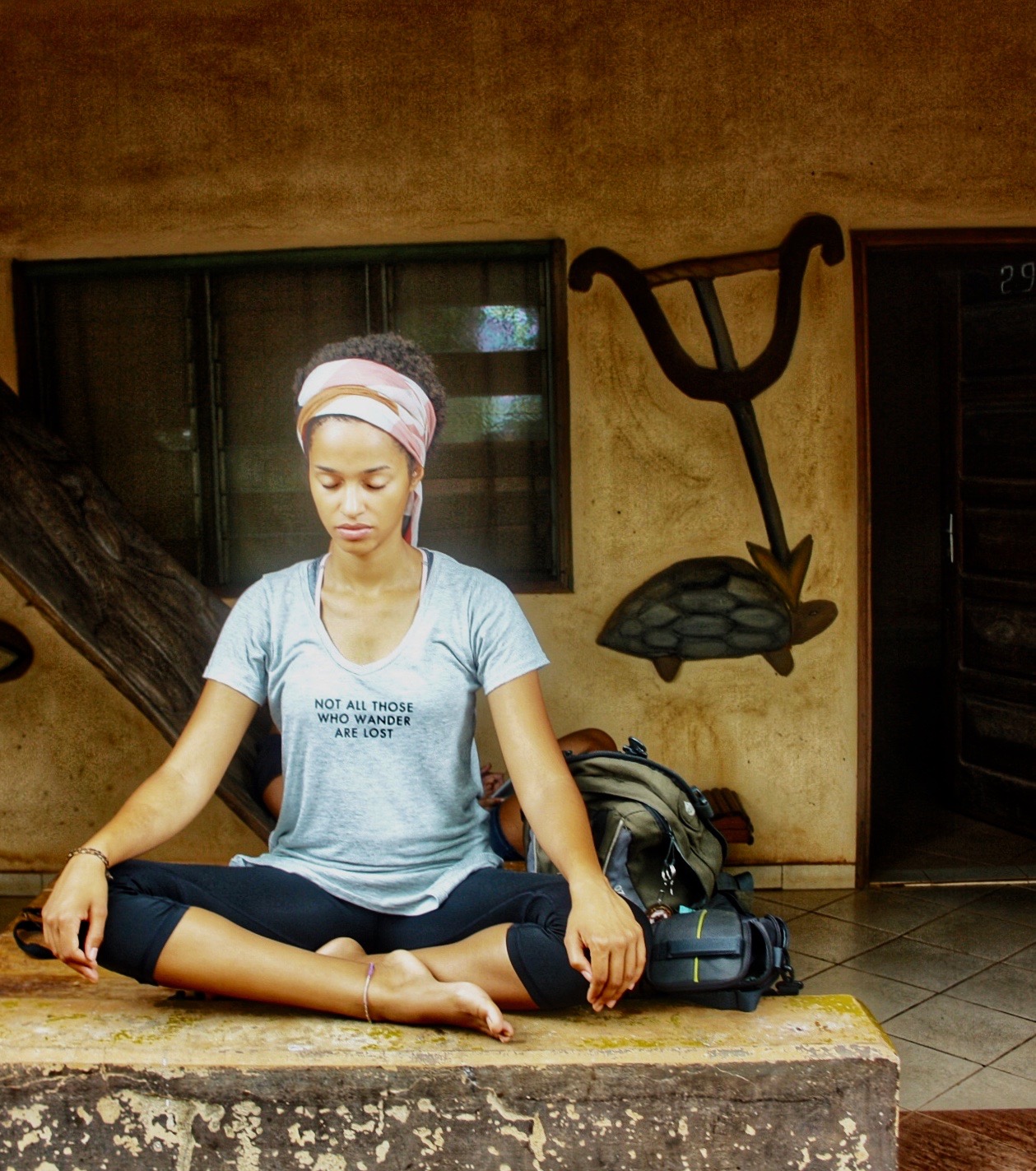 I grabbed a black marker and started covering all those men with black ink. All I left to see was their eyes. And then, still feeling this anger that had been unknown to me, I wrote down, with the same black marker: ‘How does it feel to live without a story’, It had been the pain, the pain of truths screaming from underneath the shadows, that had showed itself during that performance, there in Middelburg.

The processes that had been set in motion long before, such as in Middelburg, found a different dimension in Togo. It was there that I first really experienced that, as Stephanie Afrifa had once put it, ‘we live the stories we tell ourselves’ and that I decided to take ownership over my own story. It is one of my stories about Togo that I want to share with you now.

A friend invited me and a number of others to join in a, what he called, reconnection trip. All of us have – in one way or another – a relation with Togo. The trip to Togo was to be one in which we would make a reconnection. Not knowing exactly what we were going to reconnect, I felt I wanted to join. I made a last minute request to take a leave from work, and booked a ticket from Curaçao to Togo.

The stories we heard in Togo and Benin were those told by members of our own little group of friends, and by priests, chiefs and high officers we visited along the way while we worked our way from the South to the North of Togo and then back South via Benin. 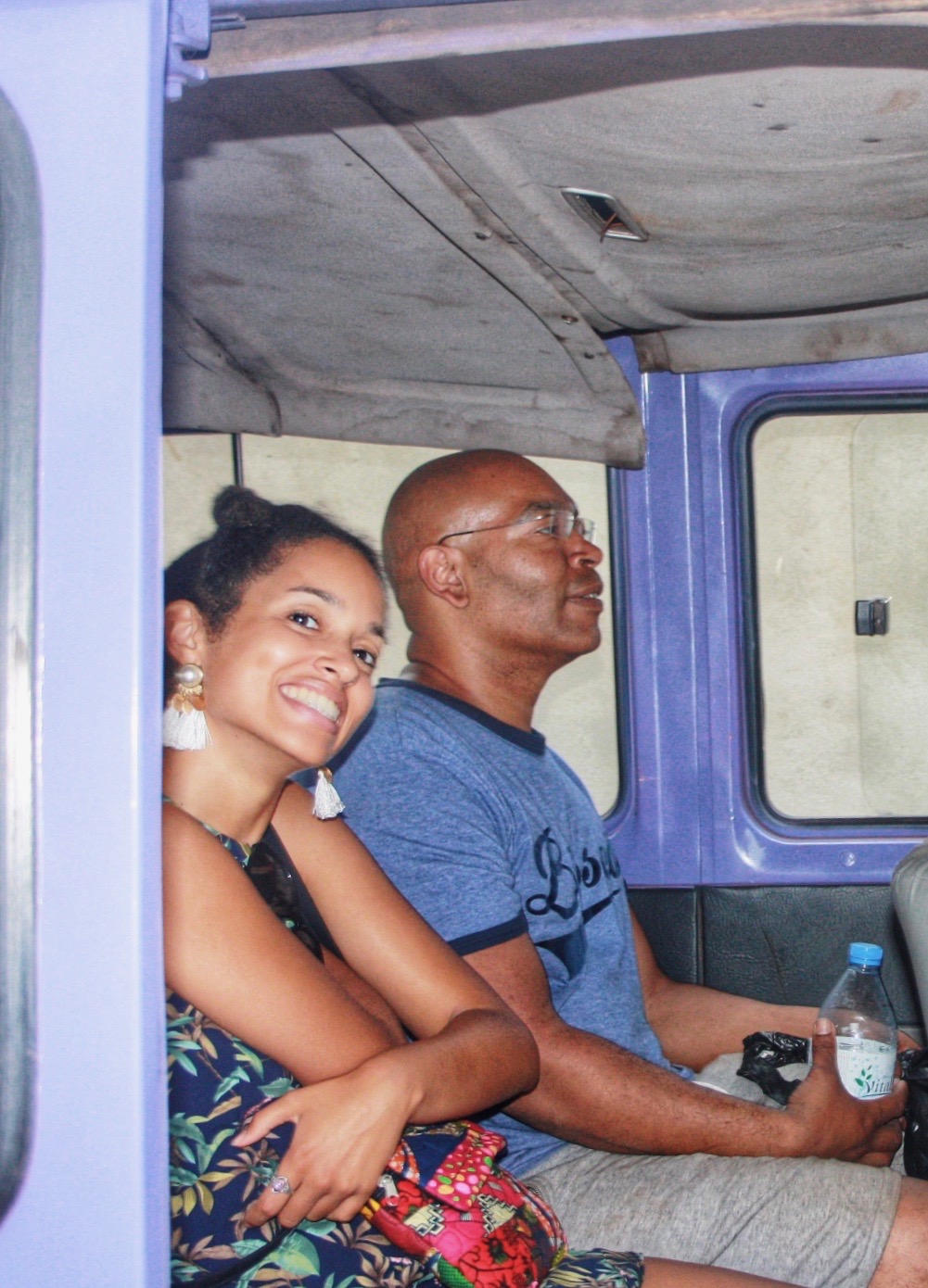 The idea of Africa and Africans was shattered by, amongst others, different stories on slavery.

First, slave trade, as done in Togo and Benin had different dimensions. You had those persons who sold captives, members from other states (tribes, I was taught to call them in the Netherlands, but from what I have seen those ‘tribes’ are much more that which we call states).

Then, you had those persons who sold ‘their own people’ in this lucrative business. ‘Own people’ being members from the same state.

And then you had royal families who trusted the words of Europeans. Royal families sent their sons to Europe with European foreigners to go and study abroad. Some came back, and with having the skills of speaking European languages suddenly obtained another status in the local societies, most never returned and are thought to have been sold in the Atlantic slave trade. 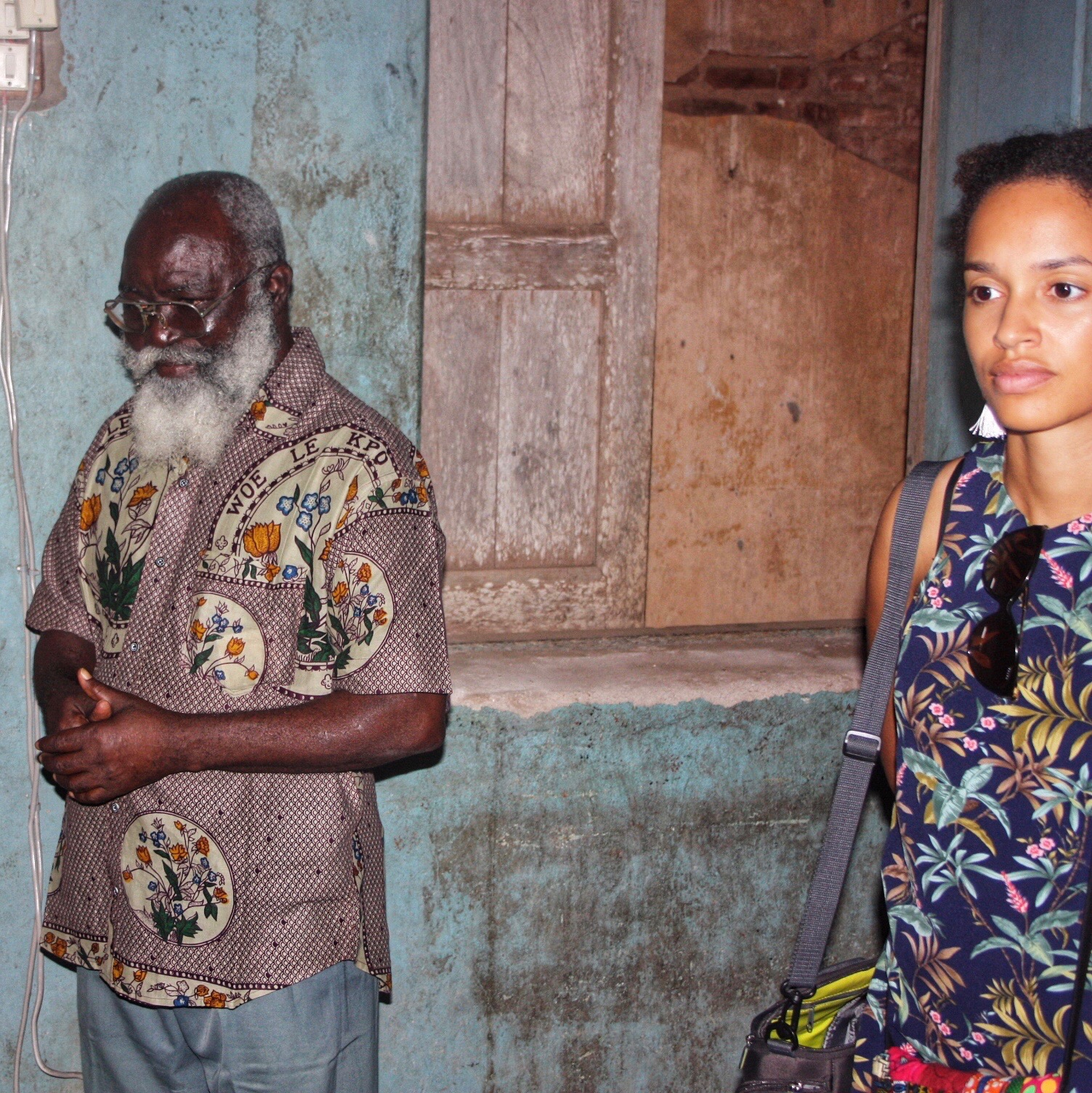 You see, already before I joined the trip to Togo, I had the idea that we had to go beyond the stories and see the complexity of reality to find that stories are just that, stories. This, I found to be confirmed again and again. For example, when a priest told me that my ancestral bone was not to be found in Africa. To clarify: the priest looks back as far as seven generations to see where one’s ancestor is from. My ancestor’s bone being in Brazil, for me meant a confirmation of that there is no such thing as a person of African descent, since we are all.

And then there was also the episode that happened when, in the middle of the night, we arrived at this absurdly big villa in the middle of nowhere in Togo. At that very moment, we – the participants of the trip – all created our truths, our stories, which, obviously, led to different attitudes and emotions; fear, eagerness, principled-ness, wanting to leave, wanting to stay. It tested the unity we had created. Accepting our different truths and accepting that stories are just stories, led us to finding solutions for the problem at hand. However, this last example also shows that stories do matter. After all, they affected our behavior and emotions. This aspect was presented to me repetitively. For example by our interesting group dynamics.

We had come together as a group out of shared interests and shared lived experiences. We even started to call each other family and called our two eldest members, our king and queen. But what set the majority of us apart from one other of our group member, was Dutchness.

Here we were, discussing and deconstructing identities, sharing stories about being Othered. This was what we shared. But at the same time, our group members who were born and raised in the Netherlands, including me, were the ones ordering fries with mayonnaise and having a hard time to not speak Dutch when we were amongst each other. With that behaviour we Othered our own beloved non-Dutch, coincidentally my cousin; she, born in Cape Verde and raised in Cape Verde and Portugal, was part of us but in a different way. 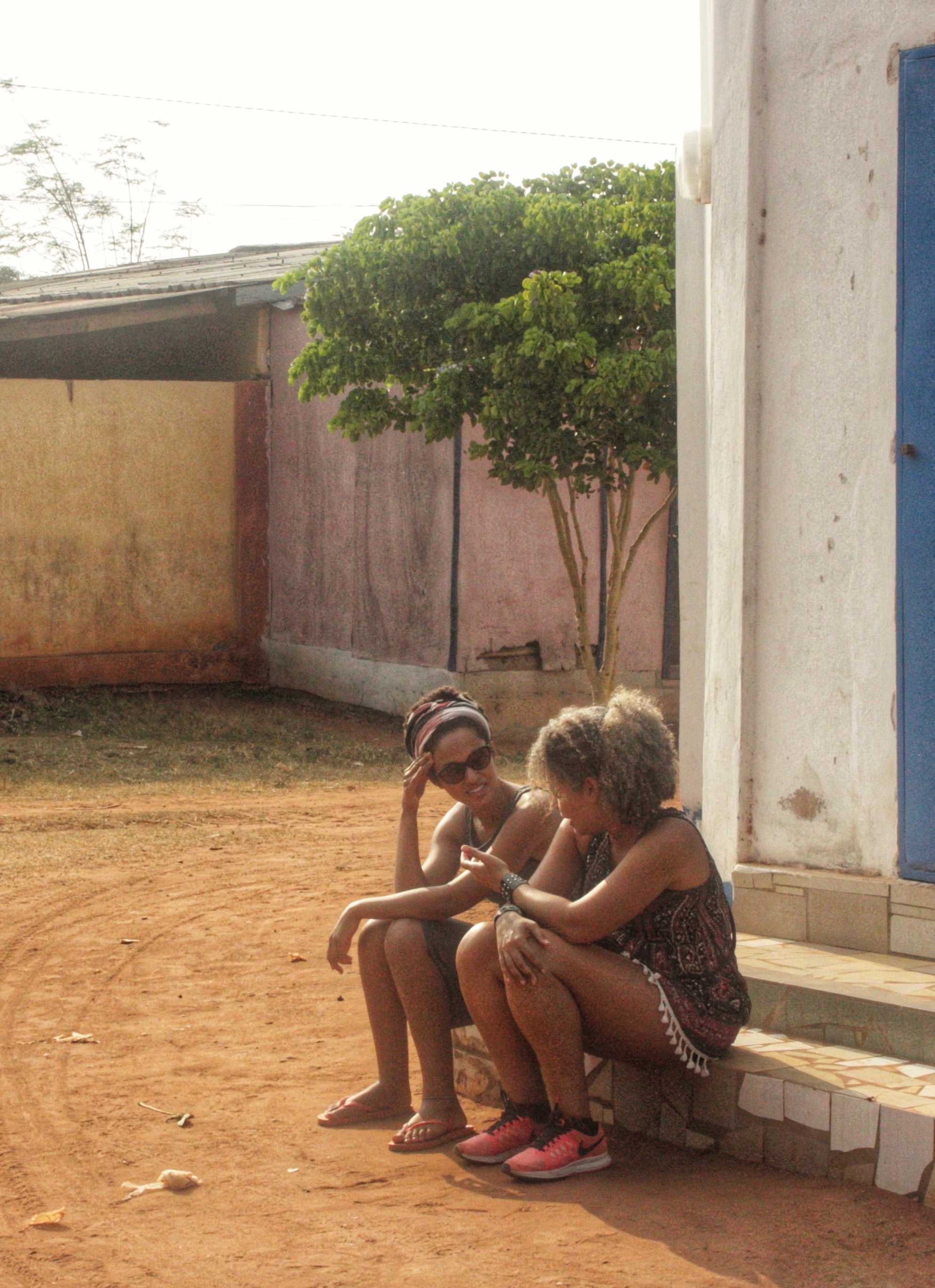 And then there was André whose presence never failed to remind me that we can’t dismiss stories as mere fiction, that they matter and create lived experiences. You see, he uses words, rituals and codes of conduct that were passed on to him through his ancestors. These same words, rituals and codes of conduct can be found in the places we visited. And seeing that, recognising that what had been passed on was present in Togo, that reconnection, together with the unveiling of different truths, brought about healing. There is so much I wrote down here, which I could have written down in more detail. Maybe that would have let you to better understand my point. But I hope that even through this effort – this story, you get my main message:

You see, although stories are just that: stories; they are not. They matter.

DESIGNED WITH ♥ BY FABIENNE